Friday – we took the Dixie Highway to Cincinnati. It only takes 20 minutes to get from Dayton to Cincinnati ,< /sarcasm > . Because it was so quick – I insisted we stop at Skyline chili and eat lunch, instead of having the picnic that I packed to eat between touring Woodford Reserve and Buffalo Trace.

We made it to Woodford just AFTER the last tour at 3:00 pm. *sigh* Then we drove to grandma’s house in Falmouth. There was major road construction on 64 and 75 so we took a shortcut. Since everything is only 40 minutes away – our short cut only took 2 hours and 100 miles. (but they were FUN, FUN, FUN, back roads with tight turns). 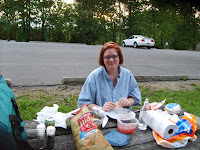 Since MacDonald’s was really the only choice for eating in Falmouth, we had the picnic for dinner out at Kincade State Park. It was GREAT. Nice weather – a pretty spot – and NO MOSQUITEOS!

After dinner – we returned to the house and I watched The Princess Bride for the first time. It was good (for as long as I stayed awake) … which might not have been much past the torture scene).

We were up and out early Saturday morning – and headed back to our bourbon tastings tours. I highly recommend both Buffalo Trace (owned by the Goldring Family of New Orleans) one of the only privately held distilleries in the US. Our guide, Freddie, was full of stories and information. (I might write more about this later.) 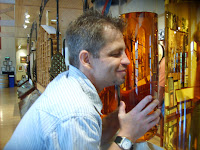 While Buffalo Trace was a small, intimate, tour the Woodford Reserve was much more scenic AND the only thing they produce is a seven year old bourbon, whereas the Goldring Family is also producing Rain Vodka – and a whole slew of other products. They also sell their used barrels to the Boston Beer Company who use them to make Utopias Beer.

We left Woodford at four o’clock – and since it’s only 40 minutes from Frankfort, KY to Dayton, we were home by 6:30 Saturday night. < /sarcasm > On the way home, I made a blind man’s dream come true – and let him behind the wheele of the Mustang as we went north on 127. (about 10 miles maybe. It was a fun/thrilling/white knuckle ride, depending which side of the car you were sitting in.)

Once the Mustang was unloaded, I started the oil and sea salt coated baked potatoes. Then I prepped the green beans for our bacon/garlic/onion/vinegar sautéed vegetable. I introduced Didi – to Havarti cheese – and made an appetizer out of Roma Tomatoes broiled with the cheese. (mmm - very, very good). I added a salad of Italian greens, red bell peppers and feta cheese. Of course the star of the meal were the Peppercorn Steaks with bourbon sauce. I knew I had a hit meal on my hands, as there was only occasional grunting heard across the table. No more talk about supply-side economics, the failure of General Motors to make wise management decision, or the winning streak Cincinnati Reds (until they fell to the Florida Marlin’s last night 8-7 *sigh*).

After dinner – bourbon and cigars on the porch – and then we watched Spinal Tap (also a first for me.) Okay – truth – almost ANY movie is a first for me – as I only see 4 to 5 movies a year.

This morning Didi made pancakes, I went to church – and now we’re getting ready to hit the Dayton Dragons game!

Ps: Here’s my artistic-looking ankle. Now it’s starting to look like this on the other side too! 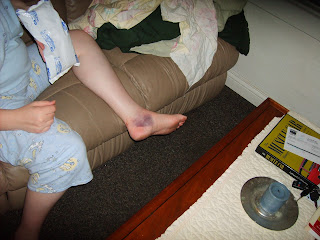 Email ThisBlogThis!Share to TwitterShare to FacebookShare to Pinterest
Labels: Guilty by association, On the road again

ouch! your ankle looks almost as bad as my post-surgery shoulder did. I hope it doesn't feel as bad as it looks.

the book The Princess Bride is good, and the movie is pretty faithful to it. It's a particular favorite.

Ooooo, your ankle look horrible. Normally, it's so cute. I'm behind on all things Mitter, but catching up.